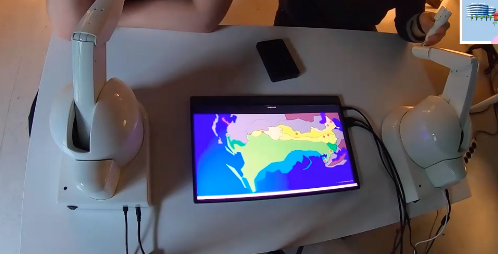 Haptikfabriken, through Jonas Forsslund, acted as a consultancy company in a Vinnova-funded project that started in November 2019 and ended this year in May. The aim of the project was to develop new digital multimodal learning environments in which visually impaired and sighted pupils in high school should be able to do group work together. Since a large focus was on visually impaired pupils and how these pupils can be more included in group work scenarios, haptic and audio feedback were of course central to the design.

The project was led by professor Eva-Lotta Sallnäs Pysander at KTH, who wrote the initial funding application together with assistant professor Jonas Moll at Örebro University – the newest addition to the Haptikfabriken crowd. The other partners in the project were The Swedish Association of the Visually Impaired, The National Agency for Special Needs Education and Schools and the digital accessibility expert company Axess Lab. The project included not only development of new digital learning environments but also in-depth stakeholder interviews and evaluations at schools. This video gives a short presentation of the Vinnova project.

Haptikfabriken was involved in several parts of the project. First of all we were responsible for developing one of the digital learning environments – a visual/haptic/audio map interface in which visually impaired and sighted pupils can collaborate in solving tasks related to geography (e.g. finding/naming cities or finding/naming vegetation zones). We will get back to the details about especially the haptic aspects of the interface in a later blog post. Second, Hatpikfabriken was also involved in discussing and iterating design ideas for the new applications. Third, Haptikfabriken designed the first version of an adapter enabling the use of an old Phantom Omni (uses firewire ports) for development on a laptop. The fourth, and maybe the most important part, was that the project used two of our Polhem devices during testing and during the evaluations of the final prototypes in schools. This enabled us to test the Polhem devices in a research setting in which a user is very dependent on the quality of the haptic feedback due to lack of vision.

More will be written about the effect of using the Polhem devices in the project later on, but let’s just end this post with a more general and personal observation: I was the one using the Phantom Omni device during application development. It worked fine and the resolution was good, but it was not possible to entirely get rid of e.g. vibrations from the device, creating haptic artefacts. When I later on tried the applications at Haptikfabriken using the Polhem devices I was rather surprised about how much better the haptic experience was, both regarding resolution and stability. The device is clearly comparable to e.g. the Touch X device from 3D systems. This is one of the main reasons why I decided to invest in Haptikfabriken.